What is it that technology does to us? 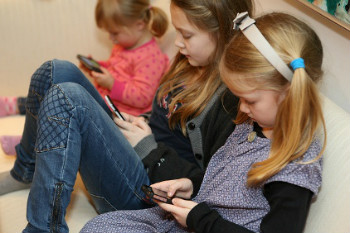 It has this strong pull.

The screens lure us in and we are stuck.

We stay attached there where we lose track of time until we realize the time lost and have to force ourselves to come out of its spell.

Computers have created extra body parts for us. We walk around with our phones in our pockets or purses or grasp them tightly in our hands. Now we can attach one to our arm as a watch. If God-forbid we leave our phone somewhere we go into panic mode, like we’ve lost a limb. We feel naked, missing a part of ourselves.

Everyone can see today that it is a problem. But we also know that it has solved a lot of problems. It is a solution and a problem.

I was watching an old episode of Seinfeld with some friends when there was something crazy that happened that could have completely been avoided if the characters just had cellphones at the time. We ask, what did people do without cellphones back then? How did they meet up with someone or call them if they were running late? What did they do if they got lost? Use a paper map? Cell phones have made things much easier in many areas of life like this.

Social media keeps us connected and up to date on anything you want to know from your sister’s baby’s first smile to Justin Beiber’s next interview to tragic news around the world.

Technology has revolutionized the business world with advances in automatized equipment. In one hand this lays off manual laborers, but in the other hand creates new jobs. “Overall, technology creates more jobs than it destroys, even in the long run.” (source) Online marketing grows businesses like never before and phone/video conferencing creates a meeting anytime anywhere.

In education, the internet has made research much more accessible and abundant, but also has become a huge distraction for students.

Technology has made cars safer and more efficient, but at the same time has caused millions of accidents due to cellphone use.

After the peak of excitement at how much technology can do for us we may have started on a decline where it has started to hinder us as human beings. Some would say we are becoming too dependent on it.

Will we slowly become less socially adapt to having face-to-face conversations? I felt a wave of sadness recently when, at a restaurant, I saw a table of adults talking and then table of six of their kids (ten years old and under) all playing with smartphones (theirs or their parents) and not interacting at all. This doesn’t mean that adults aren’t ever guilty of doing the same. The older the adults though, the less likely you are to find a table full of people with their phones six to ten inches away from their faces. Will these kids grow up to not have any close friends?

I am a part of the millennial generation so I have definitely grown up with technology. Smart phones didn’t start up until I was in high school and I got my first when I was in college, but they are definitely full-fledged now. So even with the difference that I have with kids and teens now days starting young, I still think that I would react similarly to this experiment:  Researchers took away the phones of school aged kids for a certain amount of time and after a while, they actually began “experiencing symptoms of chemical withdrawal.” (source)

The same source talked about how the internet has altered the way that people learn. They said that students today tend to “dart between pages of info instead of concentrating and understanding one source fully.” Furthermore, “This type of thinking may leave children incapable of the discipline needed to read and write at length.”

It looks like technology has and will continue to make changes in how we operate as human beings. So how do we deal with this in society to keep moving forward, and not going backwards, as social, emotional people?

In some ways, the internet has made us more humanitarian. For example, this Christmas, you may have seen a story about a girl who lost her family in a fire and all she wanted was to fill up a tree card-holder with Christmas cards. Her story went viral and the response she got was astounding. There was a picture of her in her garage surrounded by boxes of cards and packages from Amazon.

So let’s keep doing caring things like this and also pay attention to the people right next to us. Our inner selves absolutely need community and connection to thrive, it’s another branch of our needs like eating and sleeping. Limiting our technology use so that we actually bond with the people around us takes discipline just like anything else in life. We have to be dedicated to make “phone and tablet free” times that are devoted to just talking and looking each other in the eyes. Play games, go outside and don’t let yourself become one of the robots.

Catamount has always been there for us and has been very instrumental in helping us succeed.

Without Catamount we would not be where we are today...period. They have been a tremendous help and are very supportive!

When we needed help Catamount stood up to the plate for us. Their service is outstanding...great people to work with!